Our Name and History

If you’re new to the city, you may mispronounce our name, Lloydminster, by adding an extra “i”, and you wouldn’t be the first! But it is indeed Lloyd-min-ster, not Lloyd-min-i-ster. It’s a unique name that is a truly special part of our heritage. Arriving from England in April 1903, the Barr Colonists settled in the Lloydminster area. Their leader, Reverend George Exton Lloyd, was commemorated by using his surname, Lloyd, when naming the new settlement. The word “Minster” was used to pay respect to the church. In 1905, when the provinces of Alberta and Saskatchewan were established, the small colony found itself somewhat divided.

In July 1906, the Alberta side of Lloydminster was declared a village, and just under a year later, the Saskatchewan side was declared a town. Unfortunately, in 1929, a fire destroyed many buildings in the communities, but the tragedy subsequently brought the village and town together. On May 20, 1930, the merger was formally declared, and Lloydminster came together as one city spanning two provinces. 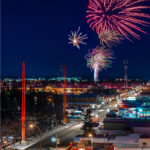